Hi everybody! There is such protocol named MoIP it is type telegraph protocol  through TCP / IP. 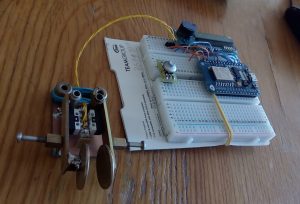 In the Internet there are several servers on which you can connect a client software attach the key and transmit information by telegraph. On the server, you can switch channels that you can communicate with. There are also channels on which news is constantly broadcast, that is, it is possible to study the telegraph, to hold meetings in the style of the conference, that is to connect with the group on a certain channel, to conduct inter-club training and competitions. The MorseKOB open source project can run on a Raspberry Pi singleboard computer. Customers can work with an application for PC, AVR with ethernet modem, is a cross-platform implementation on Python, it is possible to connect both strait or iambic keys to the client. The protocol is focused precisely on the telegraph, the packet looks like -200, 255, -85, 255, -85, 85, -85, 255, -85, so the encoded letter Q value with a minus defines a pause in milliseconds without a tone signal, the value in the plus value of the length tone signal in milliseconds point or dash.
My realization of MorseKOB on WiFi module ESP8266
Transmite